Capstone to a Career and an Adventure

In 1871 at the age of 67, Horace Capron left the Department of Agriculture and accepted an invitation from the Government of Japan to lead a delegation to help develop its northern province of Hokkaido.

The Japanese Government recognized his expertise in farming and mineral development. They considered it a coup to have Capron accept the position.

The Japanese government paid him $10,000 plus expenses to undertake the mission.

Family pressures may also have been a factor. His youngest son, Osmond, had been blinded when rescuing people from a hotel fire – and now depended on his father for support.

In Japan Horace Capron experienced extraordinary beauty, earthquakes, beheadings, betrayal, new lands and new peoples. He met the Emperor-and the Hokkaido's soon-to-be-displaced native population. The experience was the capstone of his career—and an amazing adventure.
On this wild coast, in this almost unpeopled  Island thus remote, I stand solitary and alone, a pioneer, as it were, upon the outpost of civilization…” Horace Capron Japan Journal. p. 89


A Great Mission
Horace Capron’s official reports and letters suggested ways that the island of Hokkaido could be developed. He introduced western fruits, vegetables, crops, and livestock—including his favorite Devon and Durham cattle and new breeds of horses.  He suggested a layout for the city of Sapporo, which is now the capital of  that Japanese province.

"I often ask myself what is to compensate me for this great sacrifice, these great fatigues, and very great hazards at my time of life— and answer myself thus, without success in our great Mission, nothing.” Horace Capron Japan Journal

He brought in industrial equipment, steam engines, saws and an assortment of farming tools. He established experimental farms, had the land surveyed for mineral deposits and farming opportunities, and recommended water, mill and road improvements. His advice drew upon his previous experiences with industry and agriculture, developed earlier in Laurel.

"...The canal through which water flows to the mill now under construction no more than a moiety (?) of the power can be used, it is all lost..in a rapid fall….If this water was taken out from the main street and conducted up a higher level.. the water necessary for the (irrigation and city would be available). HC Letter to the Kaitikushi 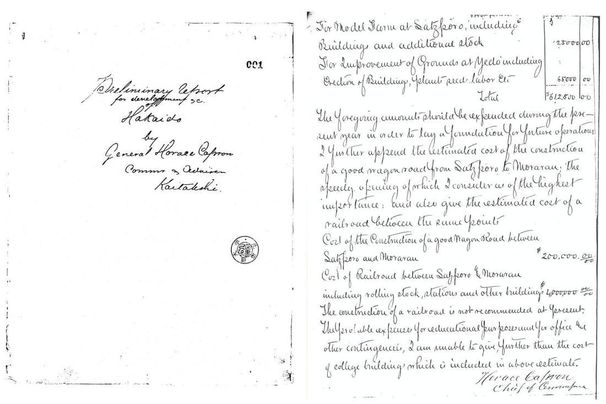 Ainu couple
Japan is a Mystery

"Everything in Japan is to me a mystery; how it is that a people naturally so intelligent, ingenious, appreciative, and so capable of imitating everything they see, should remain so long in a state of semi barbarism, is perfectly incomprehensible.”
HC Japan Journal p. 38

Capron admired the Ainu—the native people of Hokkaido—that he encountered and compared them favorably to his experiences with Native Americans. He worried about the impact of “civilization.”

Yet, he believed implicitly in the value of Western culture, in Western-style progress, and the need to “save” barbaric natives.
“…Were this present existence to be the end of all things, we might be inclined to let them alone, but for a people to live and die without religion, without a hope for immortality—aye there is the question.” Horace Capron Japan Journal

Kuroda Kiyotaka
Betrayal and Friendship
Many of the people Horace Capron brought with him to Japan made important contributions to the country both during his stay and after. However, his tenure in Japan was not without controversy. Some of his Associates worked behind his back in Japan and at home to discredit his efforts.

Articles appeared in both Japan and the US attacking his work – and his personal competency. In 1872 an article in The Nation quoted one Japanese-based American as saying “...Mr. Capron...is regarded by the Government as almost useless...”

These attacks wounded him greatly.
..The heartburnings arising from a consciousness of great injustice done by those most infamous of all fiends, who from the shades of civilized society, stalk abroad in the shape of human beings, skulking behind, misrepresenting—although not misunderstanding—your every act and motive…to gain what they can through fraud and misrepresentation.”  Horace Capron Japan Journal
At the same time, Capron found the Japanese colonial government bureaucracy set in its ways, slow, and bloated. Too often he felt they did not act on his suggestions.

Yet Koruda Kiyotaka, head of the colonial department and later Japanese Prime Minister, became a close and trusted friend.

Horace Capron had three audiences with the Emperor Mutsuhito of Japan. Such meetings were rare for Westerners, and in his journal Horace boast about the greater honors he has received than others, including United States diplomats.
At his last interview the Emperor stated:
"Indeed your services were valuable, and deserve my high appreciation, and it is hardly a matter of doubt that the future progress of that Island [Hokkaido] the fruit of your labor, will much advance the happiness of my whole Empire.” English translation of remarks from the Emperor of Japan. Quoted in HC Japan Journal p. 268 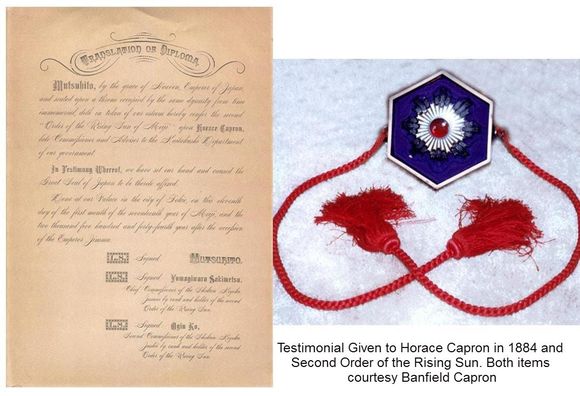 Horace and Margaret (who had joined him in 1872) left Japan in may that year. In 1884, the Government of Japan recognized Horace Capron’s contribution to the development of the province by awarding him The Second Order of the Rising Sun.

In 1969, one hundred years after the founding of Hokkaido, the Government of Japan erected a statue to Horace Capron in the central plaza park of the city of Sapporo in Hokkaido.  It stands next to a statue of Kuroda Kiyotaka.
Statue of Horace Capron in Sapporo
English Dedication Text
January 29, 1969
Hokkaido Prefecture Government
West 5, North 3
Sapporo, Hokkaido

“Horace Capron, an American citizen resigned as the United States Secretary of Agriculture to accept a position as Chief Foreign Advisor to the Kaitakushi (Commissioner of Colonisation) Department at the request of our government in 1871.

He engaged in the great task of Hokkaido development, studying the island in detail with he foreign assistant and recommending fundamental development of policies based on his excellent insight and rich experience.

His assistance to the Director of the Kaitakushi was invaluable and resulted in achievements of an outstanding nature.

In commemoration of Hokkaido’s Centennial, this statue has been erected to recollect his great accomplishments and to immortalize his distinguished service to the development of Hokkaido.”
© COPYRIGHT 2015. ALL RIGHTS RESERVED.