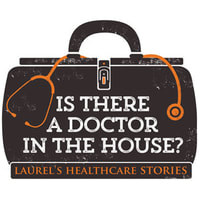 What do you do when you are sick? The Laurel Museum's exhibit: "Is There a Doctor in the House? Laurel's Healthcare Stories" tries to answer that question for one Maryland community. The exhibit explores the doctors, pharmacies, hospitals, medicines, and especially the people who have cared for Laurel's citizens for the past 200 years. It features objects from years of medicine in Lau­rel, including a nurse's cap, doctor's bag, prescriptions, medical notebooks, and more.

Stated LHS Executive Director Ann Bennett: "It is important for us at the Laurel Historical Society to connect the past with current issues and telling the history of healthcare and medicine in our community was a good fit with the transition of the Laurel Regional Hospital, and with the opioid crisis and mental health con­cerns in our nation. The exhibit will allow visitors to understand how health and sickness were managed in the past, while also viewing it through a modern perspective."

Visitors to the exhibit will meet John Cronmiller, an early physician who left an extensive medical journal (on display) filled with remedies for various conditions, including using onions to cure baldness. They'll also meet William Shreve Hudson, the town's first known African-American physician, Flora Brew­ster, a pioneering woman physician, the Warren family of physicians, who opened the town's first general hos­pital in 1941 and Dr. Richard Compton, the first specialist, and his nurse wife, Betty. Midwives, including Gertrude Matthews, helped bring many citizens into this world, and health officers, appointed by the City, have served the community from the early 1900s to the present. Main Street pharmacists from Robert Sadler in the 1870s to Ali Thakkar today have provided the medicines that treat what ails us.

A section of the exhibit will focus on the evolution of Laurel’s hospitals and urgent care centers, in­cluding the Laurel Sanitarium, Laurel General Hospital, and the Laurel Walk-in Clinic. Visitors will discover the community involvement and reactions to the creation, controversy, closing and reinvention of Laurel Re­gional Hospital, now the University of Maryland Laurel Medical Center.

Years of natural remedies and cultural practices have led to the modern medicine, advancing technolo­gies and the healthcare facilities found in Laurel. In addition to an area that explores pharmacies, the section Folk Medicine – Feed a Fever, Starve a Cold? explores the traditional body of knowledge that is shared among and passed down through cultures, families, and even physicians. Laurel practitioners participated in all these. They were also part of a major national movement in Homeopathy, a form of alternative medical practice embraced by physicians during the late 19th and early 20th Century. It is still present in alternative medicine therapies where it is now mixed with natural remedies or non-chemical interventions for conditions such as allergies or rheumatism.

As part of the exhibit, visitors will have an opportunity to share their own family remedies, vote on a health-related question of the month, and listen to a recording of a heart-beat. Children will have a dress-up opportunity in the Museum’s Diven’s Den area..