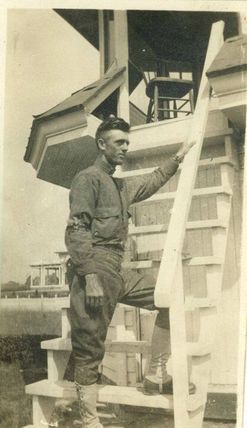 Drawing back the curtain on long-forgotten Laurel soldiers, men stationed at Camp Laurel, Red Cross knitting sessions, and dances at the former cotton mill, The Laurel Historical Society’s newest exhibit: Laurel’s WW1: From Here to Over There opens Sunday, February 5, 2017. The United States entered World War I on April 6, 1917 close to one hundred years ago. For Gertrude Ellis, Arthur Phelps, Herman Winter, Van Williams, Jay Lyons, the Welsh family and thousands of others who lived in Laurel or passed through, the war changed their lives forever.
Focusing on individuals, the exhibit explores the impact of this cataclysmic world event on Laurel and its citizens.

More than 230 soldiers with ties to Laurel, including two women, have been identified as participating in the war. 116,000 Americans died during WWI, including five from the Laurel area. Artifacts, including WW1 posters, a uniform, minutes from the City of Laurel and Laurel Wreath Lodge, trench art, and more will be on display throughout the exhibit.

Divided into five main sections over two rooms, the exhibit first helps visitors learn a little about what led up to US entry into the war. This includes a little-known Mexican venture which resulted in thousands of Maryland national guardsmen being stationed at “Camp Harrington” near Talbott Avenue down to Route 1 in 1916 prior to being sent to the Mexican border.
The exhibit explores how the town and its citizen’s were involved in the war effort – from raising funds, to entertaining soldiers. It reminds us that schools and everyday life continued in the midst of conflict. Visitors will meet George Musgrave, a Spanish American War veteran too old to fight who organized the Civil Defense Unit, and George McCeney, fundraiser and several-time Laurel mayor. Gertrude Ellis, took advantage of new opportunities for women to work for Bernard Baruch, an internationally recognized philanthropist and head of the War Industries Board. She later married WW1 Veteran Luther Waters.

Thousands of soldiers trained in Laurel. Visitors will learn about Camp Laurel – and the newly established Camp Meade. The latter was carved out of family farms and communities to accommodate the demand for new soldiers. That growth meant families like the Welshs were forced to move. Camp Laurel, located on the Laurel Racetrack grounds, housed engineering regiments. The thousands of soldiers from the 23rd, 66th and 50th engineers included Clarence “Jay” Lyons, whose letters home provide a vivid look at soldier life – and interactions with the Laurel community. After shopping in Laurel he wrote: “Just got three (pictures) out of two roles of film. They sure have a mean deal up here. They charge five cents a piece for developing this size and can get it for 3 cents at home. (June 8, 1918).

Closer to home, visitors will be introduced to several Laurel soldiers who went “over there” to fight. Several, including Arthur Phelps, were wounded. Some wrote letters home that hint at the horrors they experienced in the bloody Meuse-Argonne campaign. “ …we have been in action for the past 22 days and have seen some awful sights…“I have surely lost lots of my good friends. It surely makes me feel bad.” James Gilbert Brown, Laurel Leader letter to his father dated October 29, 1918, printed Dec. 27, 1918.

Van Williams, a Laurel area African American also served in the War. In WW1’s segregated army, he was not permitted to fight, but served in often dangerous support units. His draft registration card, with a clipped edge, also identified him as of “African descent”. Close to 30 African American men with Laurel ties have been identified. Camp Meade, and the little known Hello Girls who went overseas as telephone operators are part of the exhibit, which also includes information on Dwight D. Eisenhower and his ties to Laurel.

The exhibit ends with a look at the 1918 Spanish Flu, a deadly event that took more American soldier lives than battles, and affected many in the Laurel just as the war was ending. That included Virginia Leizear, whose baby book noted her first birthday with the frightening notation: “Sick with Spanish Flu.”

“Laurel area residents don’t realize all the people and events that took place here during WW1. Because of Camp Meade the Laurel community not only sent men to war, but met and supported soldiers from all over America who were here before they went off to fight. We hope
this exhibit will not only re-introduce long-forgotten people, including those who sacrificed their lives, but also help visitors learn more about this important world event,” stated Karen Lubieniecki, a member of the Exhibits Committee.

“Our community has been invaluable in helping us identify people and events, and we hope when others come and visit they’ll share their families’ experiences,” Marlene Frazier, another Committee member added.

The exhibition is scheduled to run through December 2017. The Laurel Museum is located at 817 Main Street. The Museum is open Wednesdays and Fridays 10:00am-2:00 pm Sundays 1:00-4:00pm. Admission is free.