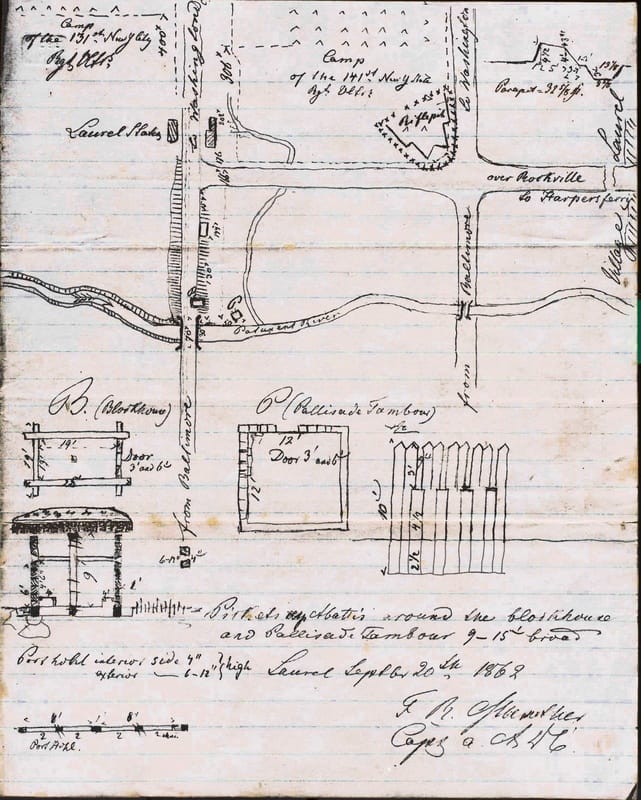 Laurel, Maryland had at least two Civil War hospitals. A flood washed away a railroad bridge and the soldier guarding it.  Between 1861-1865 at least 10 different units of Union Civil War soldiers from New York, Pennsylvania, Maine, and Michigan camped around what is now the American Legion and MARC parking lots.  Soldiers experienced death, floods, disease, and extreme boredom in Laurel while protecting the only rail line between Washington and the North during the Civil War.

Stationed in Laurel:  Our Civil War Story, invited visitors to learn about these and other unexplored aspects of how the Civil War affected the town. Laurel experienced no battles, but its strategic location on the only rail line between Washington, DC and the northern states, and a Patuxent River crossing meant Federal forces quickly and continuously stationed troops along the rail line and bridge in the town during the war. The Federals called the area “Laurel Station” likely because of its proximity to the town’s railroad depot. One of the exhibit’s highlights was a reproduction of an actual Library of Congress map sketching the Laurel Station encampment by Civil War mapmaker Frederick Munther showing several of the structures, and their relationship to the railroad, the town and the river.

The exhibit brought to light long-forgotten incidents of accidental death, disease, loneliness and boredom, and even a possible rape. Soldiers’ letters home, and a series of newspaper articles sent to the Elmira, New York paper by Chaplain Thomas Beecher, brother of Harriet Beecher Stowe, explored additional details of Laurel Station camp life. In addition to letters, the exhibit included cups, badges and other Civil War-related items belonging to soldiers who served in various units, and especially in the 109th New York.  These featured  materials belonging to William H.S. Bean including photos and his sword, on loan to the LHS from Hawaii-based collector John Bowen.
The exhibit also explored some incidents that demonstrate how the Northern soldiers reacted to the Southern-sympathizing community in which they found themselves.
Mar. 10. I attended another party tonight up on the Pike. …I am getting acquainted considerably with Maryland Society. Mar. 13 Very cold. Went to another part this evening. Think I shall not go anymore. I am utterly disgusted with Maryland society and manners. “ Diary of H.C. Leach, Courtesy Broome County (NY) Historical Society“

Another soldier, William H Cole, was convicted of rape, but ultimately pardoned by Abraham Lincoln after his commanding officer and fellow soldiers interceded.

More Civil War soldiers succumbed to disease (450,000) than died by wounds (204,000).  Laurel Station was no exception. War wounded were not sent to Laurel, but there were at least 2 hospitals in town during the course of the Civil War. Men were treated for diseases, such as diarrhea, typhoid, measles, and smallpox. Some died. The first known hospital was in a hospital tent in the camp at Laurel Station attached to the 141st New York. By January 1863, with the arrival of the 109th New York, the hospital was moved to 377 Main Street, at the corner of Avondale and Main Street. The building still stands. The exhibit included a recreation of the Main Street hospital room.
Information on the Main Street hospital cames from a book written by its matron (head nurse) Sarah Palmer, who wrote Aunt Becky’s Army Life about her Civil War experiences, which included time at Laurel. Soldiers wrote home about her.
“There is a woman here in the hospital that came out with us.  They call her Aunt Beck.  She is a perfect mother to all the boys and they think the world of her.  She has found out I am fond of soup and she gives me some most every meal.”  August 29, 1863 Edward Brigham (109th NY)

Two of the units stationed in Laurel later in the war were members of the Veterans Reserve Corps (VRC). Originally called the Invalid Corps, these units were made up of soldiers who from either wounds or disabilities were unable to serve in the regular fighting forces and found job prospects and public acceptance in short supply outside the military.  The VRC guarded railways, transported prisoners and performed many other important tasks, but ultimately received little recognition or respect from other soldiers in a society that had many wounded veterans, but little ability to deal with them.

Noted LHS Executive Director Lindsey Baker:  “Through this exhibit, we hoped visitors would be able to explore on their own what it was like in a town where no battles took place, but where tensions between differing sides simmered below the surface.”

While the exhibit focused on the units serving at Laurel Station the exhibit also briefly explores other topics, including the local African Americans (slave and free) who may have been drafted, and the town’s post-war attitudes to former combatants.

Children and adults at the exhibit had an opportunity to “picture” themselves in the army with full-size cutouts representing Laurel-based soldiers. Visitors could take a picture of themselves in the cutouts, and bring home a souvenir of their visit. The artwork for the cut-out was created by LHS Assistant to the Director Monica Sturdivant.

Check Us Out in the Press: Great Article in the Laurel Leader about our opening.
Interested in learning more?Check out these resources:

General Resources on the Civil War:

Harper's Weekly Crossroads of War- Maryland in the Civil War

Illinois (and beyond) Civil War History

Maryland State Archives: The Legacy of Slavery in Maryland

African Americans from Laurel were among those drafted in the Civil War. Images showing Laurel area residents John Williams and Henry American drafted

Political meetings   Johnson Clubs in Laurel
Immediately after the war, the question of how Reconstruction was structured showed sharp divisions between the Northern Republican effort to support black rights, and then President Johnson’s approach. Within six weeks of taking office, Johnson had offered proclamations of general amnesty for most former Confederates, and his initially stricter plans for high-ranking government and military officers quickly dissolved. Johnson also vetoed legislation that extended civil rights and financial support for the former slaves. The Congressional Elections of 1866 would determine the future course of Reconstruction.   Johnson sought to secure Republican defeat and victory for himself. One was to try to in  to form a working coalition of Conservative Republicans and northern Democrats that would back candidates favorable to his Reconstruction policy and serve as a step toward the establishment of a new political party. To this end he arranged for the organization of "Johnson Clubs" throughout the North and the border states, and for the meeting of delegates from all of the northern and southern states in the National Union Convention in Philadelphia on 14–16 August. The Johnson Clubs tended to be dominated by Democrats, and many of the participants in the National Union Convention were prominent Copperheads and Confederates. Consequently, most Republicans regarded both moves as merely devices to trick them into voting for Democrats, and instead of gaining support, Johnson lost it. Republications increased their majority in the 1866 elections.
109th New York Roster of the 109th New York (searchable – shows soldiers who died in Laurel, were discharged from Laurel, and deserted from Laurel.)
Reed Train Death (excerpt from Rooster, death from falling from train)